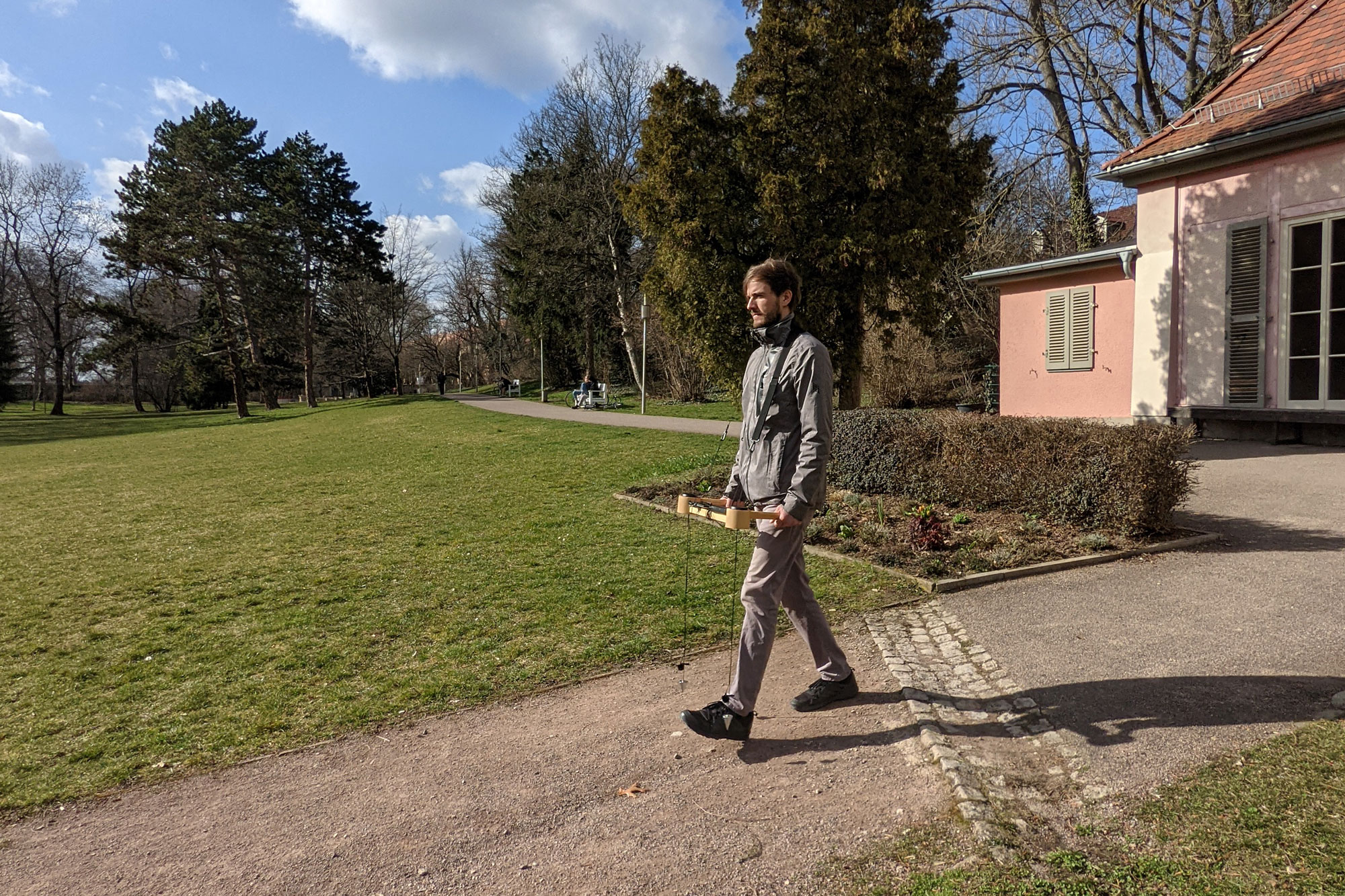 In pandemic lockdown, taking a walk is one of the few activities to escape the isolation of one‘s own four walls. A walk takes us out into fresh air, to the park or to the city. Regardless of age, it serves as a recreational and physical activity. After all, in view of the circumstances, walking has become an indispensable routine in everyday life for many, which contributes significantly to maintaining one‘s own life structure.

In his work Identical Walk, Tobias Zimmer uses the example of walking to question it as a routine and how it can be integrated into everyday life. His focus is on repeating one and the same walk as precisely as possible over 21 days. Starting from Galerie Eigenheim Weimar, Tobias Zimmer performs his Identical Walk from 10th to 30th of March, between 13:55 and 14:36. His self-developed Pacemaker records his steps via microphones and plays them back as acoustic walking instructions via loudspeaker, during the walk on the following day. The data obtained by the Pacemaker (audio & gps) subsequently generates various artifacts, that gradually fill the gallery‘s exhibition space as objects.

Over time, the steps taken superimpose in the audio track. During the walks, they mix with the ambient sounds to form a constantly densifying sound collage, in which the boundary between signal and noise blurs more and more, while it is carried into and through public space by Tobias Zimmer. Simultaneously in the exhibition space, the generated objects document and reflect the progression of the routine as well as the exactness of its repetition.

In an attempt to precisely follow this technologized and meditative routine, Identical Walk opens up a thematic field of tension between questions of self-optimization, control technology, and contemplation. Identical Walk makes algorithmic processes tangible, that have long been part of our daily live and invisibly accompany and determine them. Internalized, algorithmic ways of thinking and behavior are turned inside out and manifest themselves for the general public as a performance and art exhibition that takes a critical stance on the implications of a fully planned and controlled life. Identical Walk examines an everyday activity in its ambivalence between a rigid notion of self-optimization and the acceptance of change as the only constant. 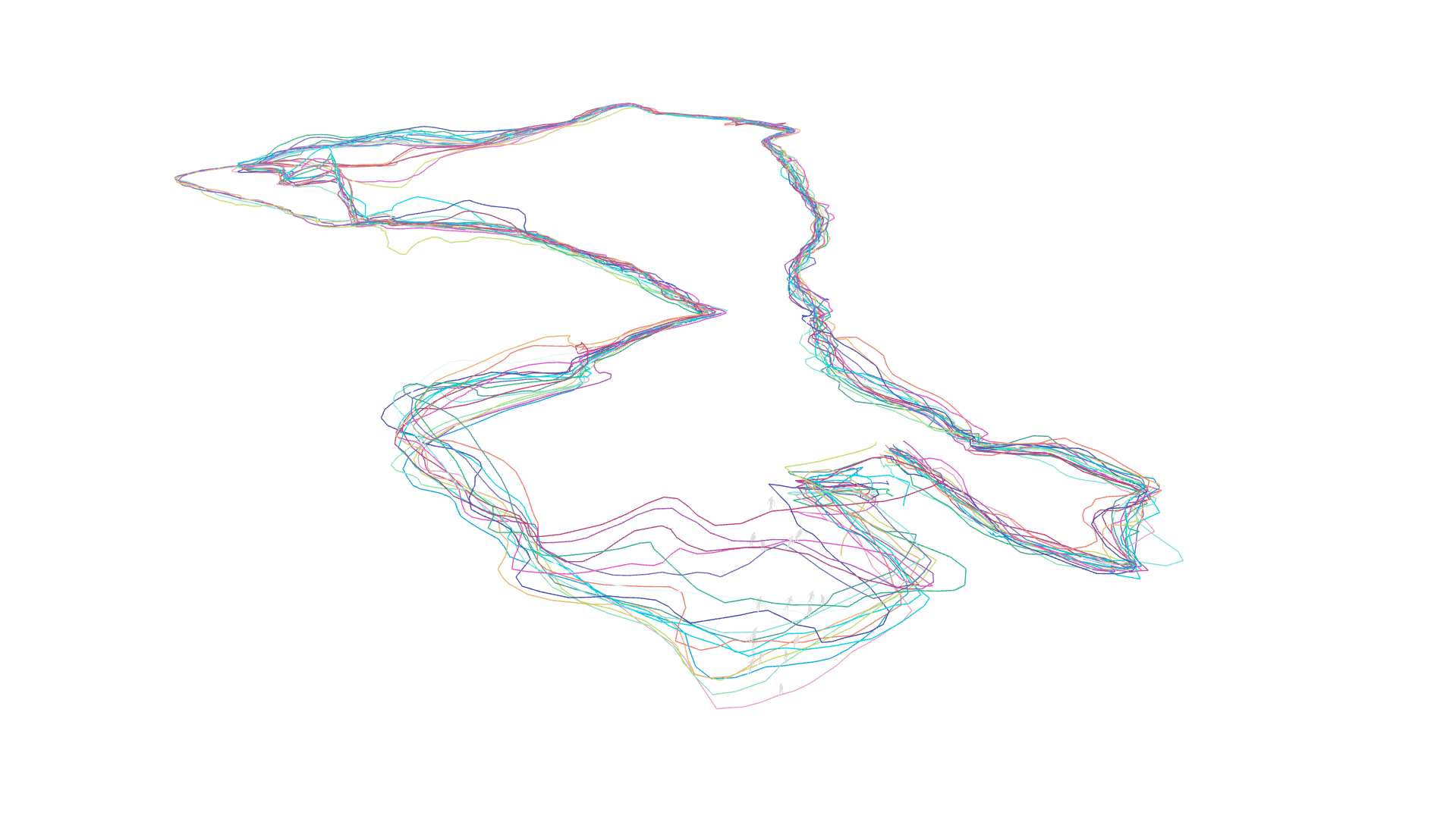 The exhibition consists of three interrelated works: The Pacemaker rests in the gallery between the walks as sculptural piece. The Walking Document is a series of cartographic sketches, which are drawn by a pen plotter in real time while walking. Finally, the generative video installation Virtual Walking, which transfers the supposedly identical walks and their deviations into a virtual world. 3D-avatars endlessly repeat the walks, based on the GPS and audio data captured while walking. As generative artifacts, these three elements preserve the traces of the Identical Walks and open up an aesthetic access to their repetition and difference.

The daily repetition of the walk is guided by the Pacemaker. The self built device records my steps via microphones and plays them back during the next walk through loudspeakers – for myself and the environment. The audio track serves as an instruction and alows me to temporally align step by step. From the second day on, the recorded steps and environment of the past walks are superimposed on the audio track. They form a sound collage that grows denser with each day, blurring the boundary between signal and noise further and further. The Pacemaker subjects walking as a leisure activity to a technical rationalization, but its rigidity is ultimately dissolved by the aesthetic nature of the overlaying audio effects. 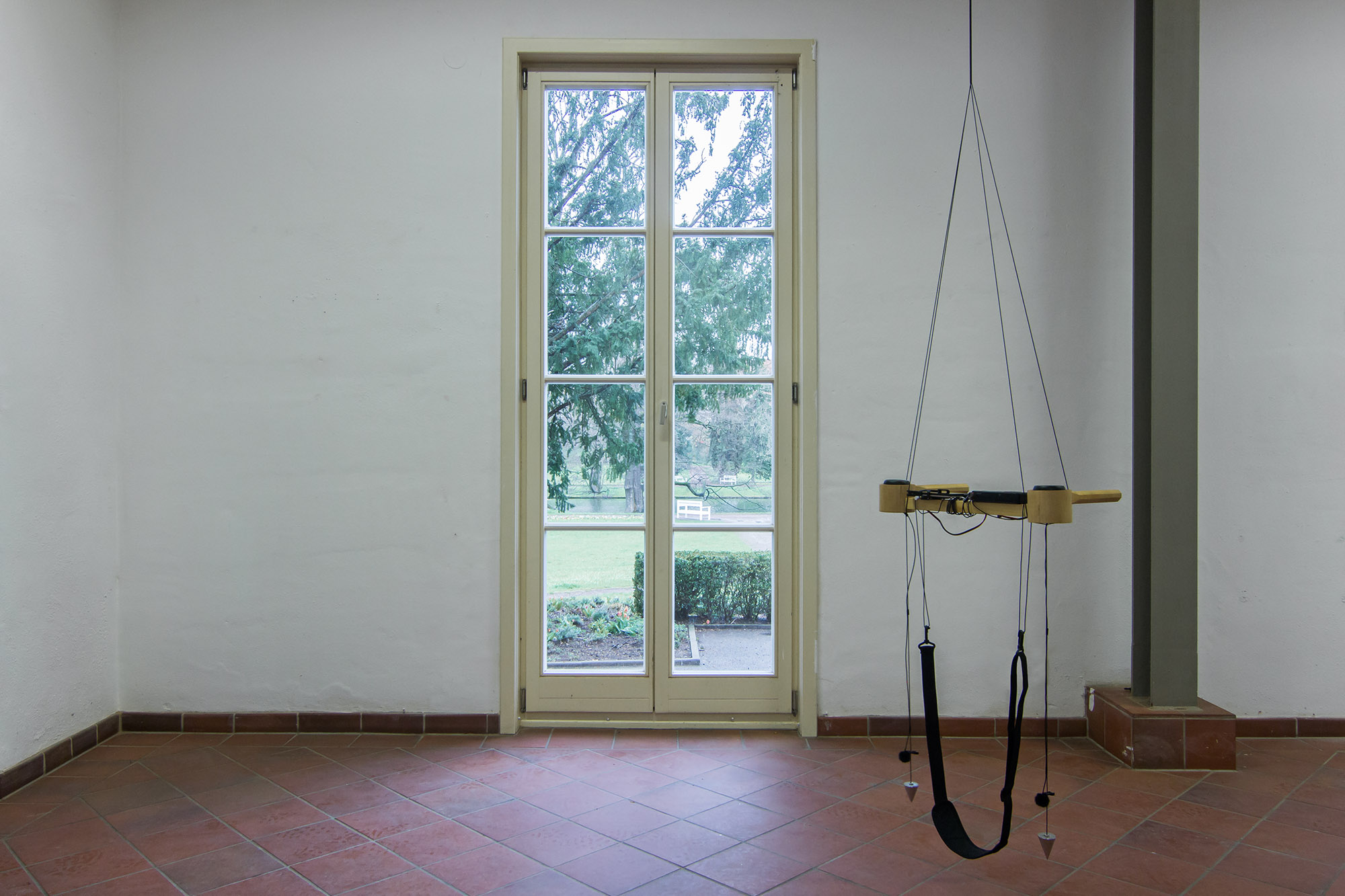 Additionally to the audio recording, the Pacemaker tracks my walks via GPS sensor. The positional data is broadcasted to a pen plotter in the exhibition room, which records myself walking in real time. It creates a unique document for each day, precisely measuring and pinning down my movements. The degree of precision of the plotter (with 0.025 mm as the smallest unit of movement) conveys the idea of exactness with which I associate Identical Walk. However, due to the unavoidable deviations from the Pacemaker's instructions and the technical variations in the GPS data, each document differs from the previous ones. 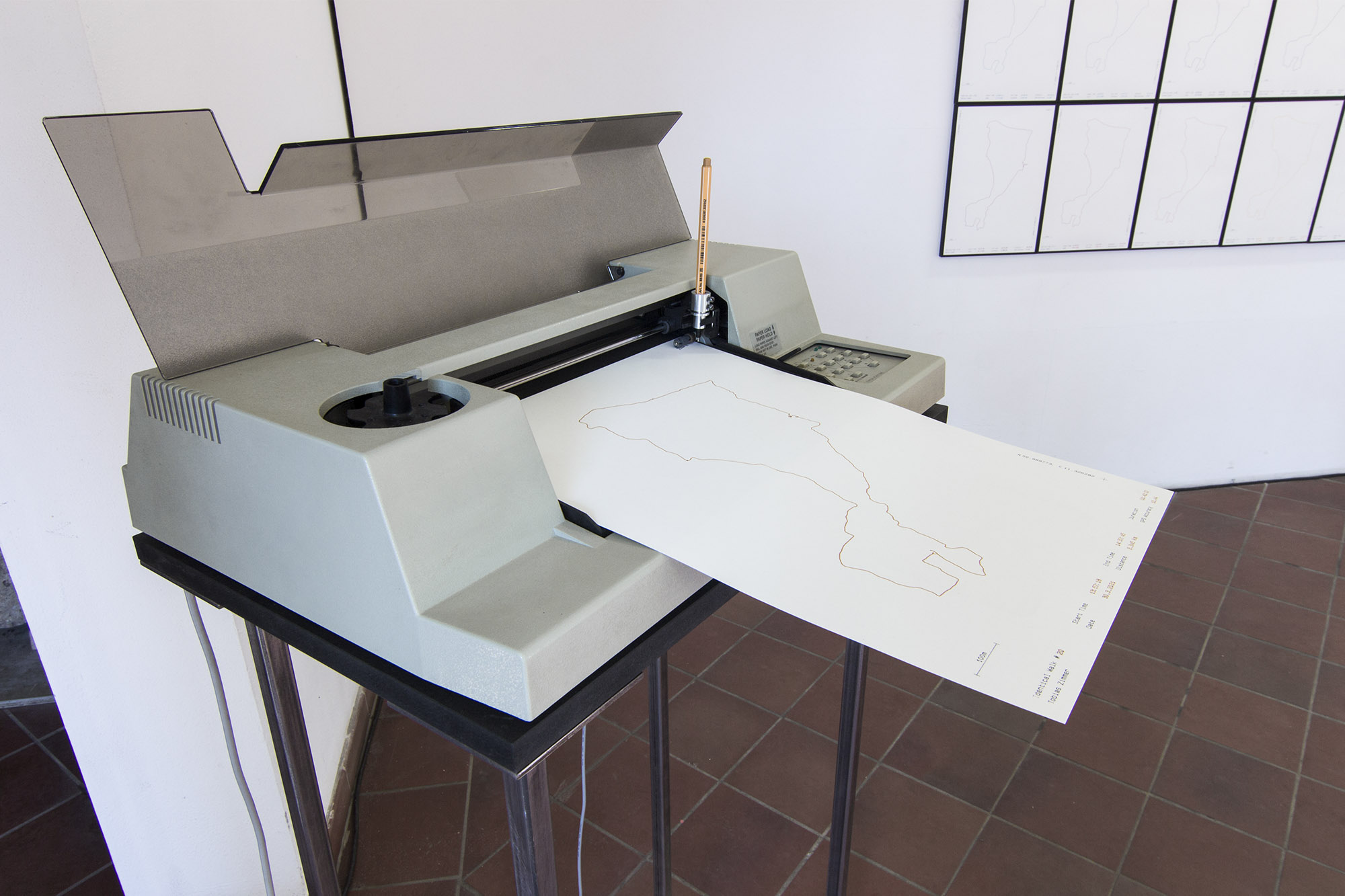 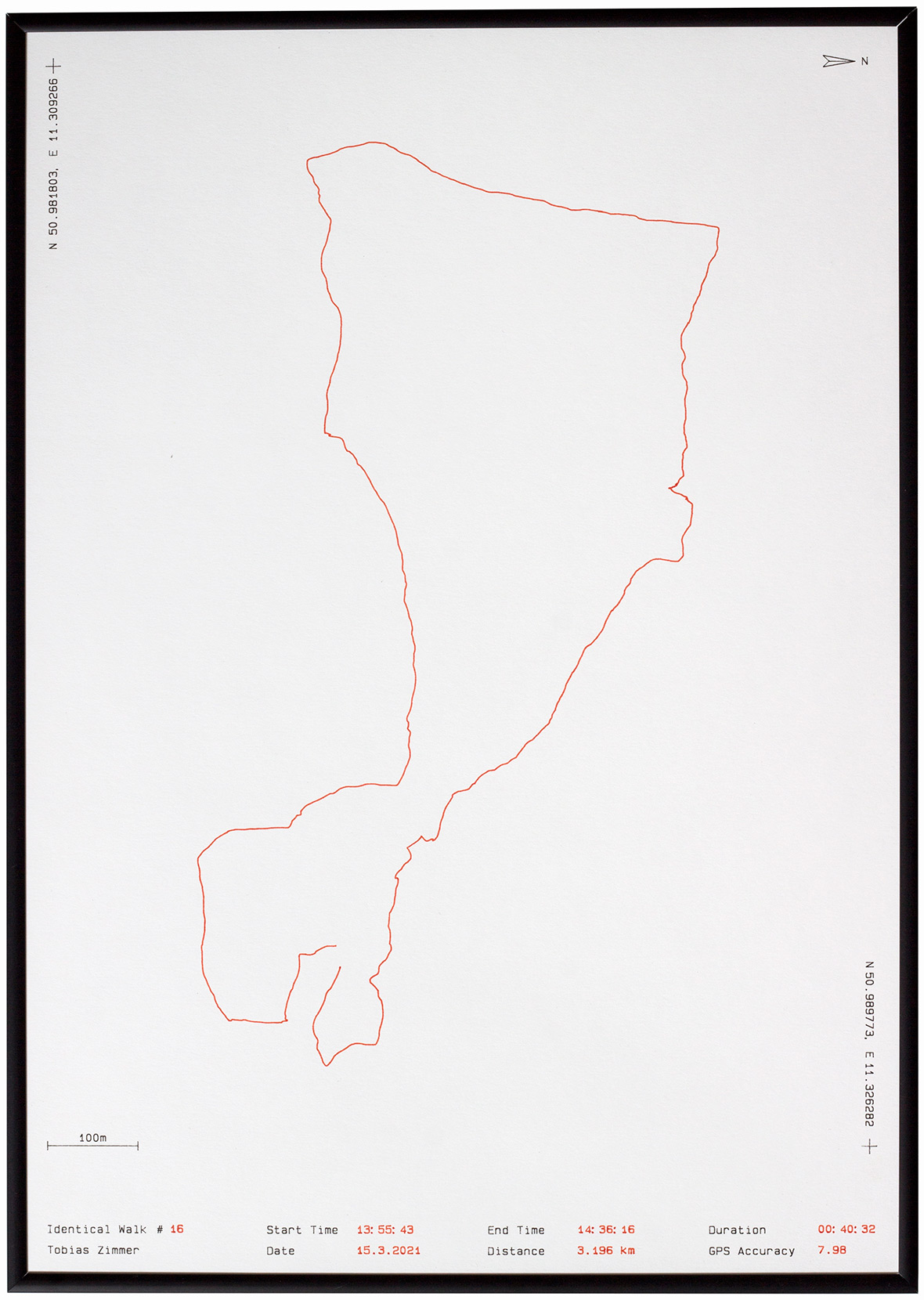 On a human-sized screen, digital avatars of myself reenact the daily walks infintely, walking on the Pacemaker’s recorded GPS tracks. The bodies of the daily growing group of avatars concentrate and intertwine from time to time and then dissolve again into singular walkers. It is apparent that their traces and movements are anything but identical, opposed to the original guideline of the project. On one hand, this is apparently due to myself and the inevitable deviations from the exact routine (Human Factor) and on the other hand results from inaccuracies of the GPS signal, which differs from day to day, due to atmospheric conditions (Technical Factor). The sound is generated from the recordings of the Pacemaker, which are played as spatial audio, originating from the avatar positions and overlapping spatially and acoustically. 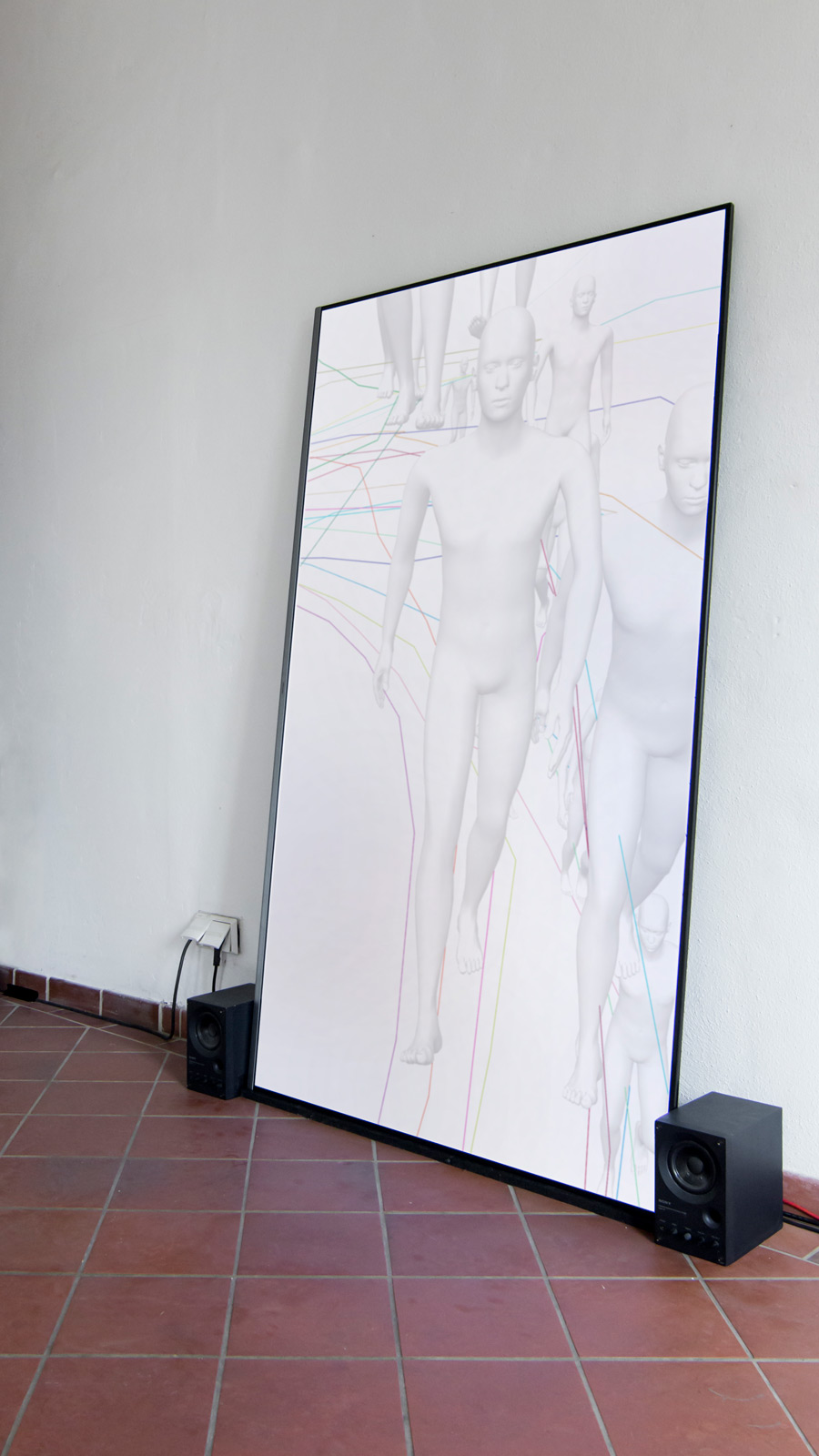 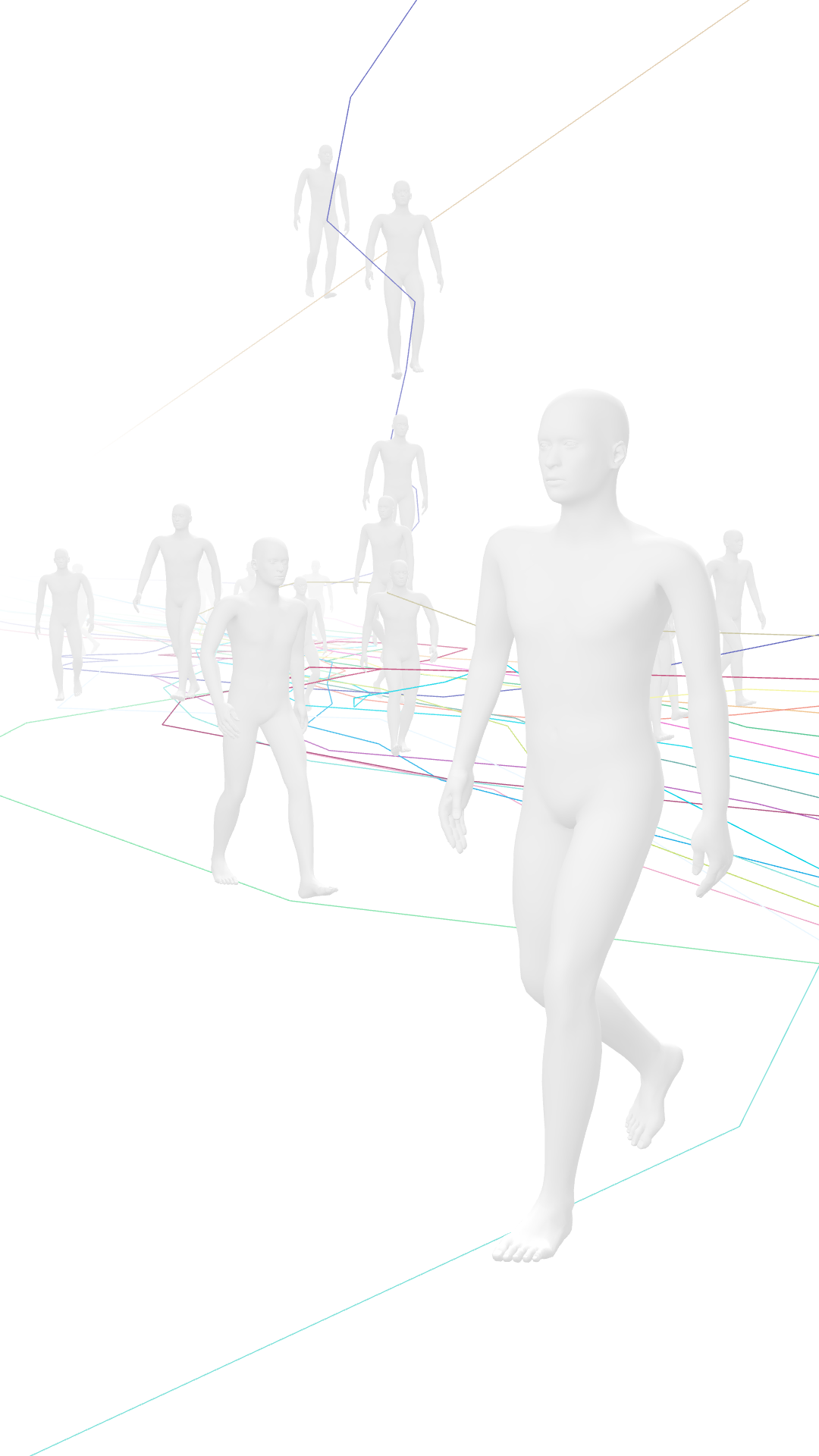 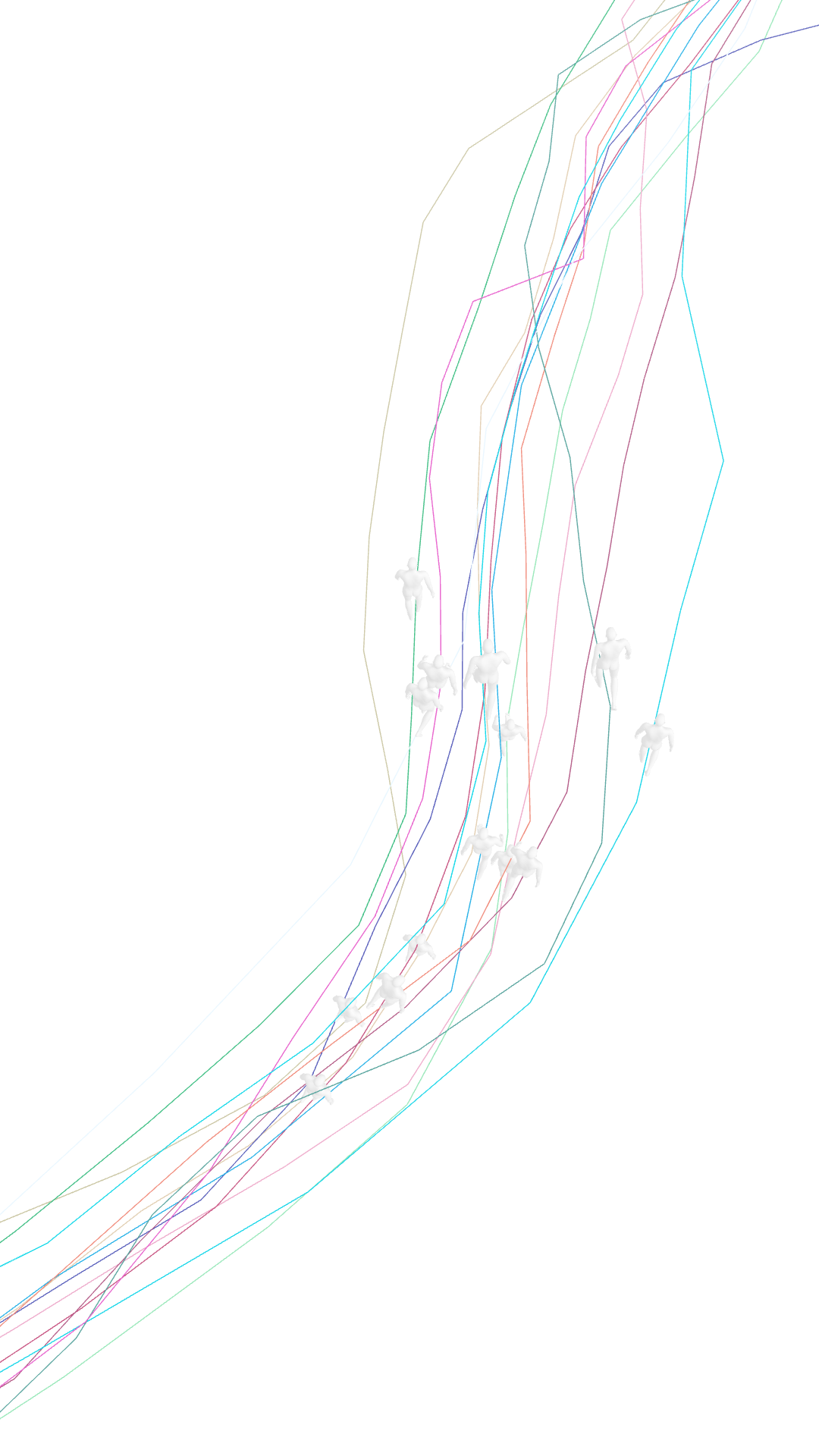 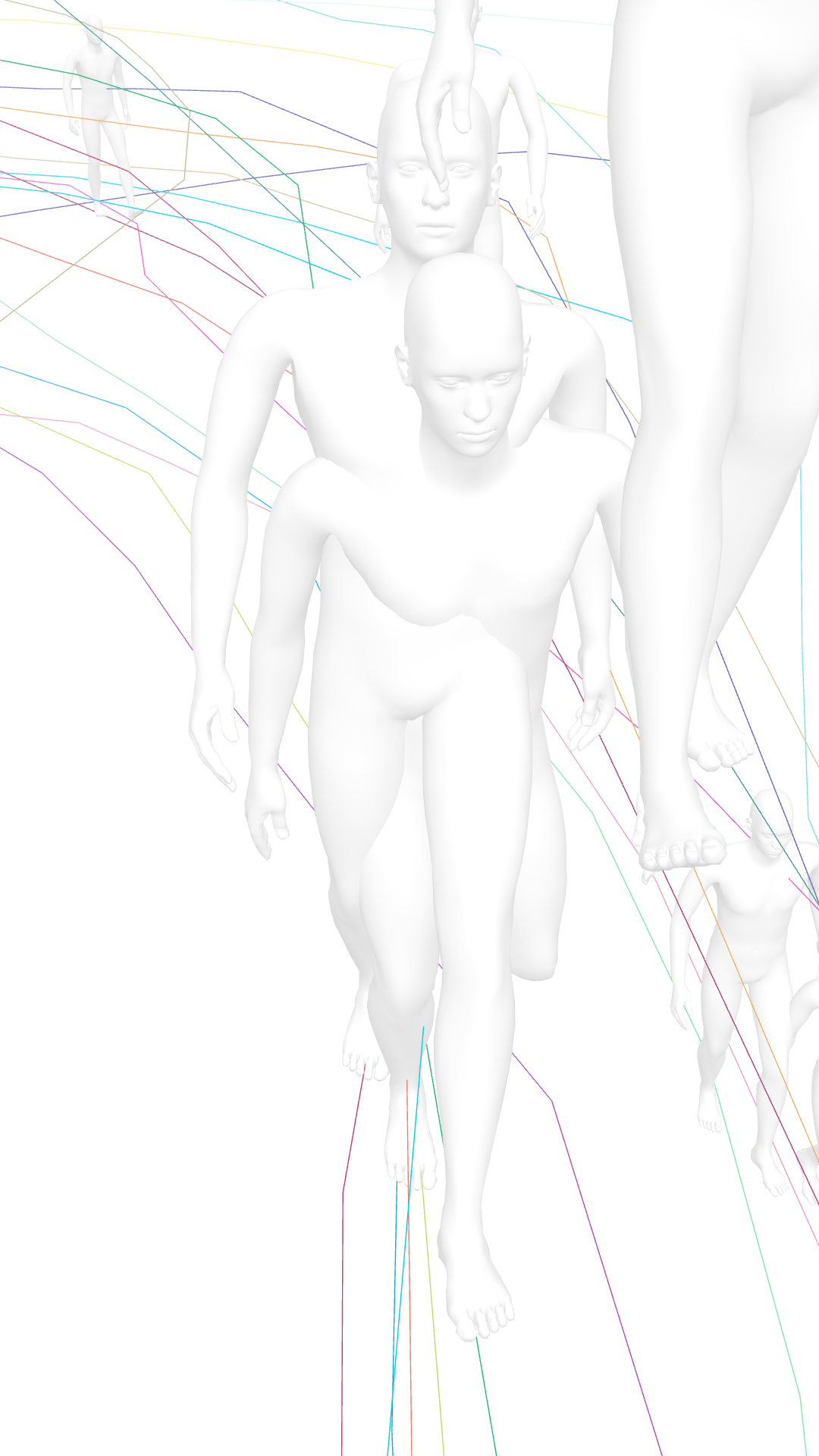 In recent decades, walking has proven itself as a form of artistic work, such as in the conceptual art of the 1960s or in audio walks. Walking is a popular cultural technique for relaxation and inspiration, which is rooted in religious practices for the attainment of enlightenment and knowledge, but is also applied in the less spiritual mindfulness movement. Metaphors around walking are part of everyday language, such as the phrase "the journey is the destination".

More recently, we can observe an increasing influence of media technologies on walking, which submit it to technical rationalization. Smartphones, with their health apps and pedometers, urge their users to walk regularly for exercise and the sake of their well-being. Being obliged to walk and tracking each and every move is opposed to walking as a leisure activity. The walking human is turned into a Quantified Self – a movement of people who are constantly measuring themselves in order to continuously improve as a result.

Identical Walk is a technologized bodily exercise, set out against the backdrop of said contemplative practices, self-optimization and technologies of control.

Walking remained one of the few activities to escape isolation in one's own home due to the pandemic lockdown and helped to maintain a daily structure. In relation to these circumstances, Identical Walk opens up a perspective in which the themes of routine, self-discipline, freedom of choice, and the practice of walking as a self-technique gain social relevance. — Why do we pursue routines in our everyday lives? Do quantification and the conscious repetition of patterns of action create a sense of orientation, security and identity? To what extent do digital and analog (self-)technologies empower or constrain us? 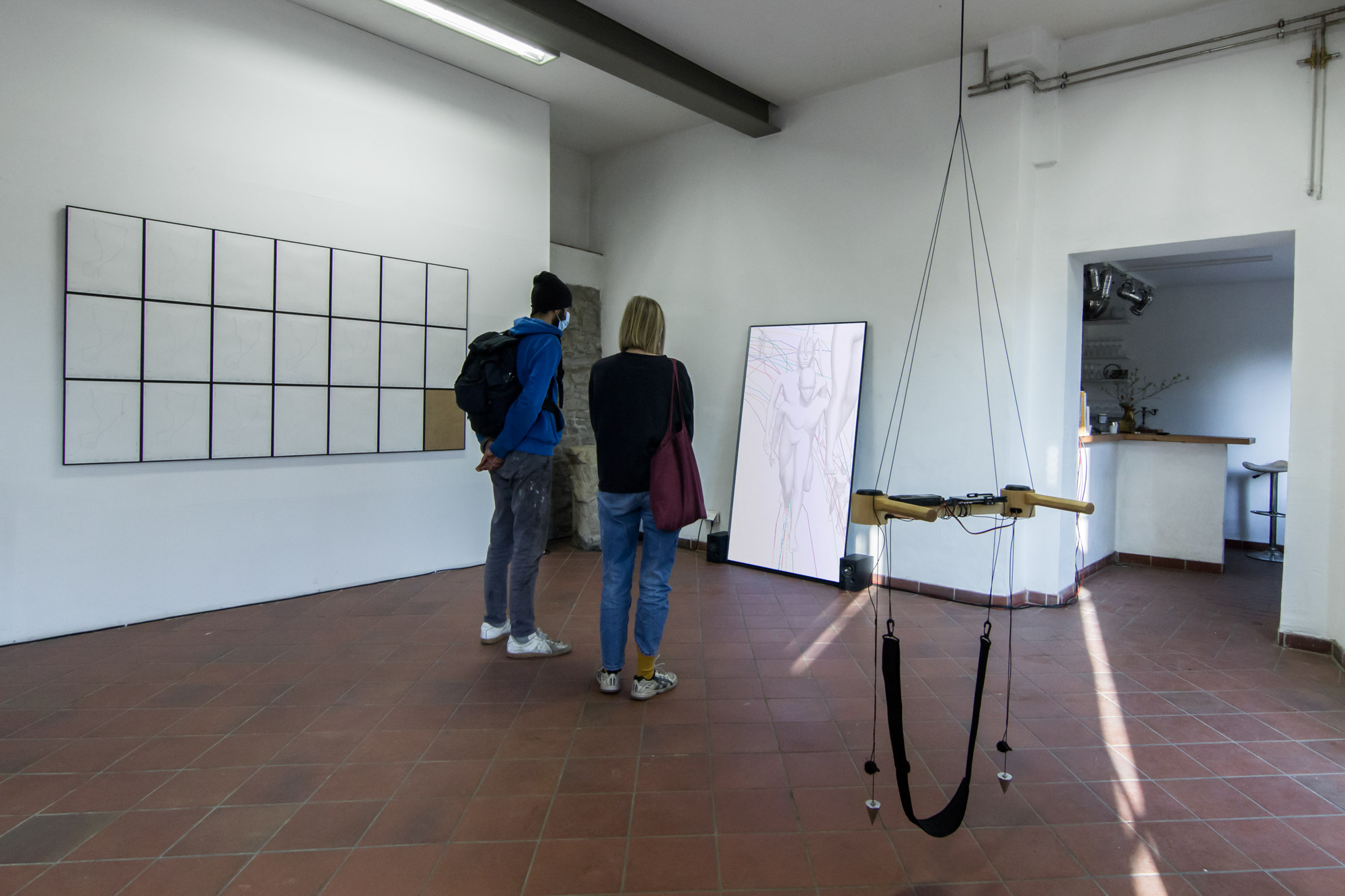 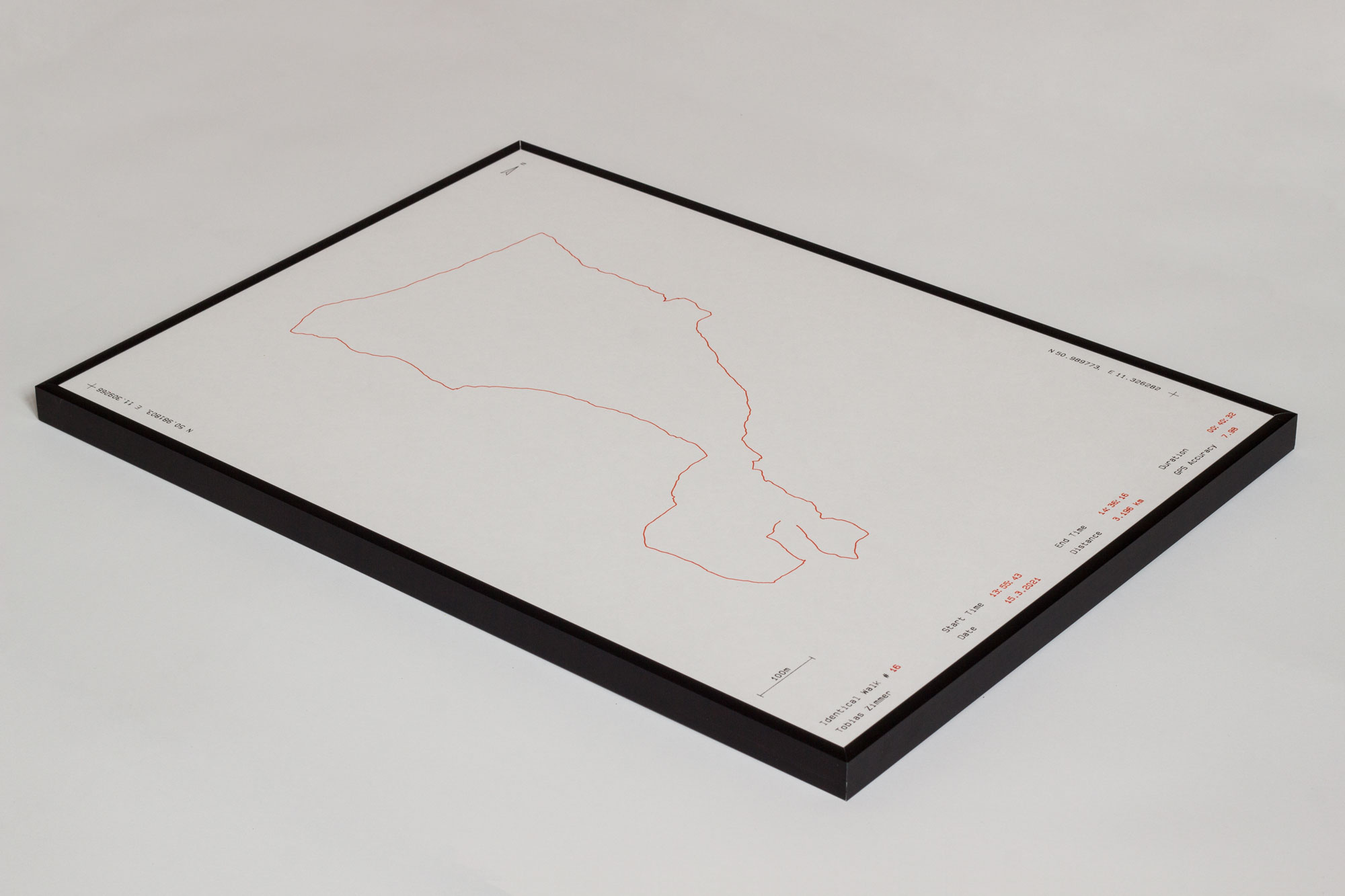 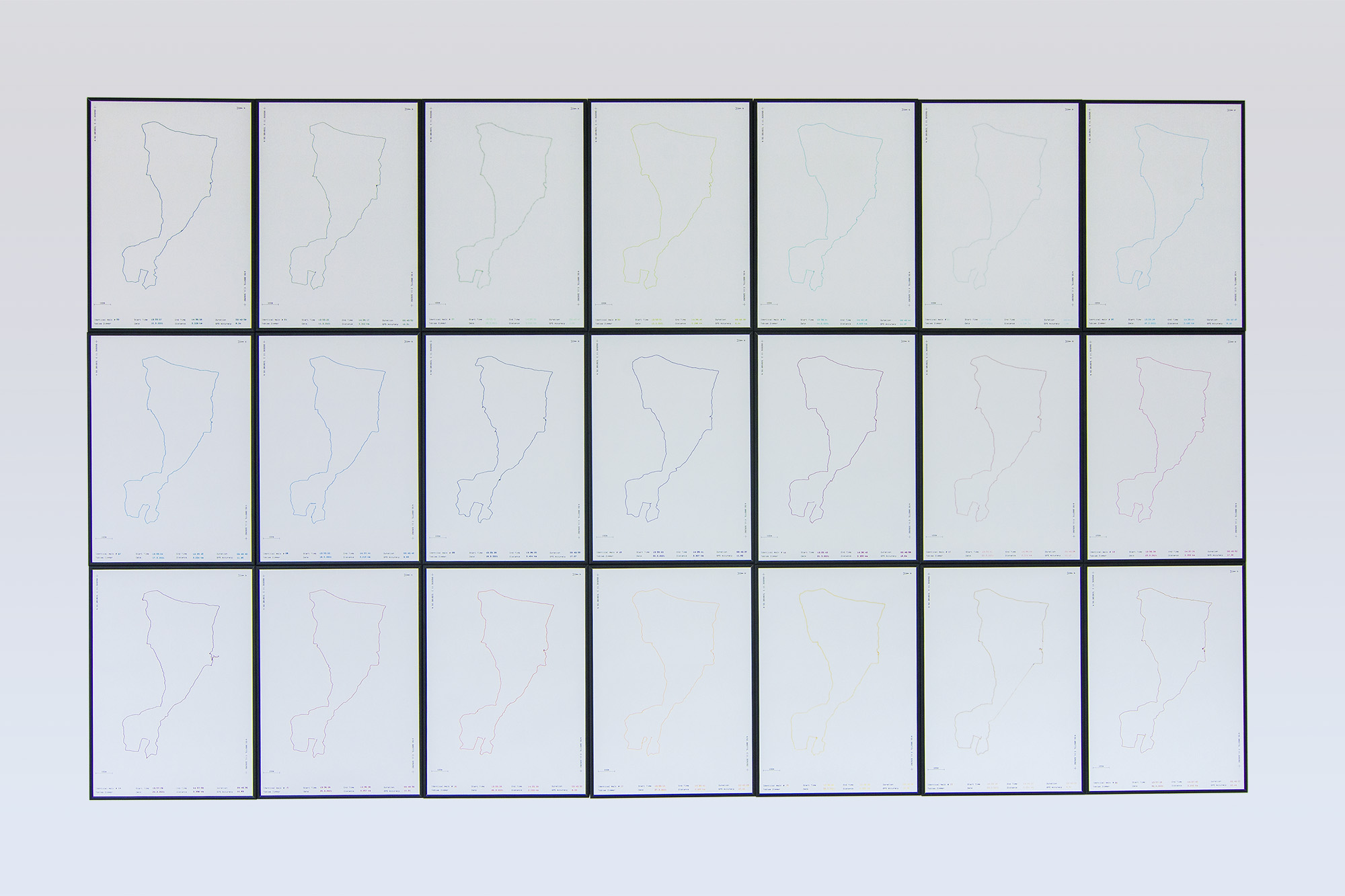 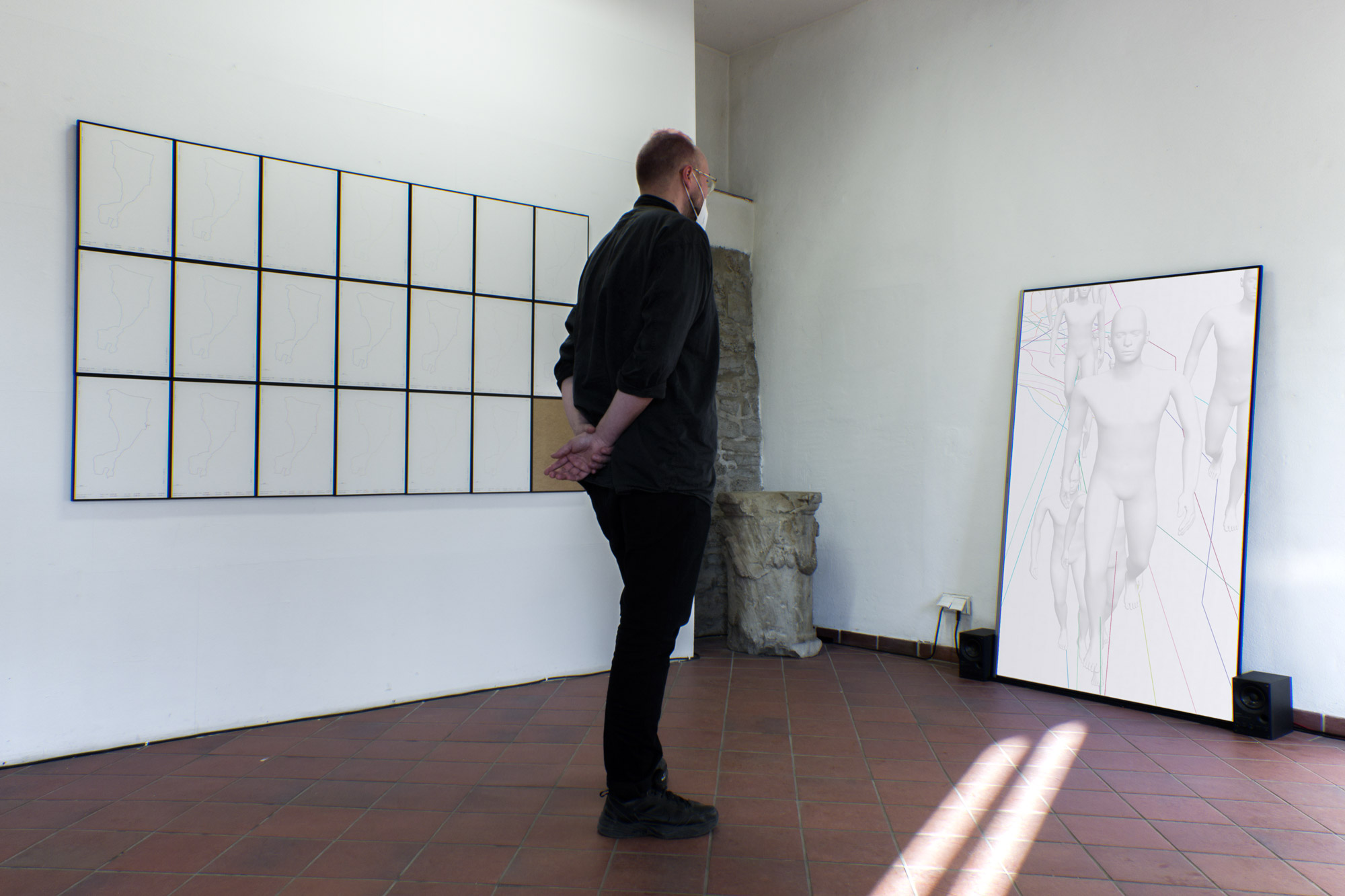